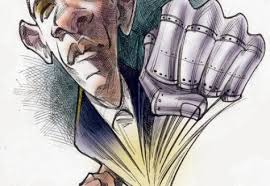 Regular readers of this blog may recall my 10 tips for participants who took part in the recent ICC Commercial Mediation Competition held in Paris – a wonderful time was had by all but that’s for another post.

One of those tips was about keeping it real and suggesting a ‘steel fist inside a velvet glove’ posture when protecting important interests (aka things that are fundamentally important to you) at the mediation table.

Judging from the feedback at and after the competition that phrase struck a chord – like  law student and soon to be lawyer, Lamice Nasr of the Saint Joseph University in Beirut, Lebanon who wrote saying the “steel hand in a velvet glove theory is now a fundamental aspect of my professional career”.

But what does it mean?

Well, for me its as much about how (often the velvet) you say something as what (often the steel) you say at mediation. Like many aspects of mediation, you can say almost anything so long as how you say it is appropriate.

So for instance, you might give early signposts of no-go zones instead of hitting them with a bump down the track and risking surprise and resulting impasse.

Something like this in your opening might work… “you probably need to know that while we can talk about X or Y, and we want to do that sooner rather than later, when we get to A and B, we will find it the hard to depart from where we’ve already signalled we are – but we do want you to know the reason for that – because we need you to see us as constructive albeit firm in some important areas – as you will be no doubt around your C and D….”

I developed these diagrams to explain mediation to my clients and to tertiary students. I’m often asked for them, so here they are.

Mediation is not compromising on your preferred outcome.

This is a settlement conference which is sometimes mistaken for mediation.

There is another way.

A creative, cooperative agreement will be reached in the area of mediated agreement which means that you and the other person have designed an agreement that adds value to the competitive agreement above.  The sky is the limit.

An efficient, cooperative agreement will be along the line of likely settlement, which means that both you and the other person have reached an agreement which meets maximum criteria for what is important to each of you.  Compare the outcome of mediation in this diagram with settlement conference above.

The difference between these approaches is in the questions that are asked throughout.  In a settlement conference, the persistent questions will be ‘What is your preferred outcome?’ and ‘How much will you compromise?’.  The primary question of a mediation will be ‘What is important to you?’

You have a choice between competition and cooperation and the results that flow from each.

For more clear thinking articles from Margaret please visit her at http://margarethalsmith.wordpress.com/