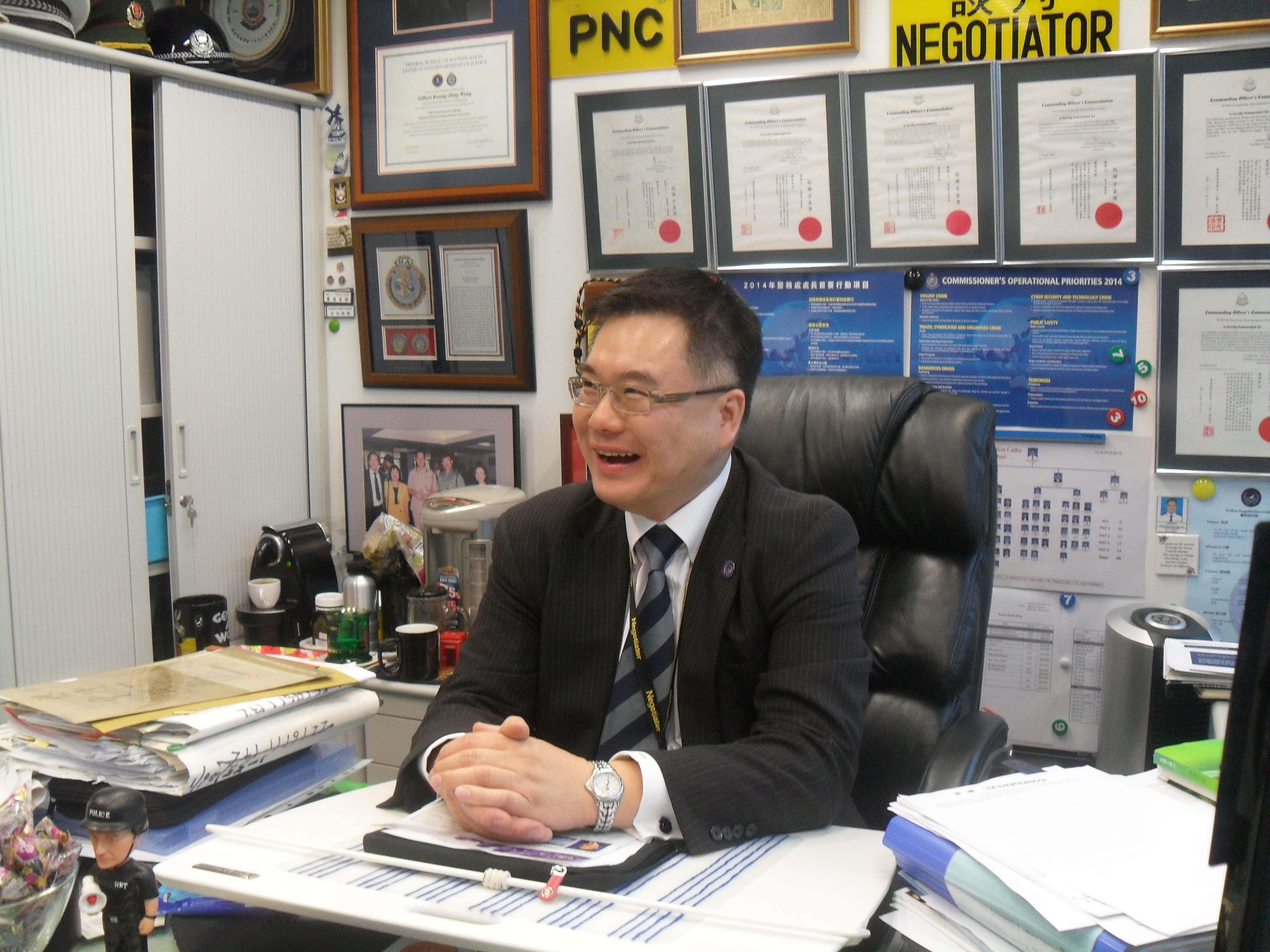 Walking into Gilbert Wong’s office is like stumbling into Aladdin’s Cave – a treasure trove of memories and stories of his 21 years in the Hong Kong Police Force. Amongst his library of books on crisis negotiation, psychology, counselling, psychotherapy and other relevant fields, there are mementos, certificates, awards and honours representing this negotiator’s passion for people and his commitment to developing the field of crisis negotiation. A certified hypnotherapist, and a graduate of universities in Australia and the United States, FBI (Federal Bureau of Investigation) National Academy, the Commanding Officer of the Police Negotiation Cadre (PNC), Dr Gilbert Wong first joined the Cadre as negotiator in 1999, six years after he first joined the police force. Fifteen years later Dr Wong is Commanding Officer of the Cadre; he also teaches negotiation-related programmes at Hong Kong University.

Last month I interviewed Gilbert and he spoke candidly about his work as a crisis negotiator and reflected on lessons for life and business. The entire interview will be available in late July 2014 in Tan Pan: The Chinese-English Journal on Negotiation.

Initially Gilbert talked about the negotiation model that the Hong Kong police negotiators employ. He compared it to the problem-solving negotiation model, typically used in mediation. Here are some excerpts from the interview.

Alexander: So you find yourself in a really intense life-and-death situation trying to build trust with, and ultimately influence, someone you don’t know and who is likely to be unpredictable. Can you tell me some more about the techniques you use to achieve this?

Wong: The techniques we use as crisis negotiators can be explained in four stages: active listening, empathy, rapport, and influence. People in crisis need to be heard and feel understood. They all have their own unique story to tell. Active listening or empathetic listening attends to these needs from the standpoint of the person in crisis; it is the first step in developing a relationship that can ultimately lead to behavioural change and an end to the crisis. When we arrive at the scene, things are generally tense, there may be a lot of confusion and there is generally a lack of background information or intelligence about the would-be suicide subject and relevant events. We use active and empathetic listening to help us buy time while the emotionality of the person in crisis decreases and their rationality increases. This shift has to occur before we can commence option generation and problem-solving.

Alexander: The four stages you talk about — active listening, empathy, rapport, and influence — will be familiar to many readers from dispute resolution and business backgrounds. How does the crisis-negotiation model compare to the standard problem-solving negotiation model used in law and business contexts?

Wong: We found the problem-solving model did not fit all the needs of crisis negotiation. We need a few more instruments in our toolbox to work with a wide spectrum of people in extreme crisis situations. Quite often suicide subjects – take suicidal gamblers, for example − have already explored many ways to deal with their problems. They have failed to find a solution and it’s at that very point that they might decide to commit suicide. So, for the crisis negotiator, it would be naïve to think there is going to be a quick fix. Compared to the problem-solving negotiation model, the crisis negotiation model places more emphasis on engaging with emotional and relational issues. One of the most important aspects of crisis negotiation is figuring out “who” the person [in crisis] is. Who are they, really? What’s driving them? So deep and sensitive listening, patience and genuine curiosity is crucial.

Alexander: Is there a particular negotiation model that you use?

Wong: We use the Behavioural Influence Stairway Model (BISM) developed by my good friend, Dr Gregory Vecchi. This model rationalises the various critical steps of crisis management. The BISM has been widely adopted in the academic field and the law enforcement arena for crisis negotiations. The BISM graphically depicts and explains the process of how a negotiator can develop a relationship of trust with a person in crisis. The model moves the negotiator from “no relationship” with the person in crisis to a “relationship” that enables a negotiator to influence and ultimately persuade the person in crisis to follow the negotiator’s suggestions.

In this discussion, what was interesting for me was the focus on curiosity, empathy and relationship. While we address these points in standard mediation training (let’s say a 40 hour course, standard in many common law jurisdictions), I often wonder how much participants retain and the extent to which they fall back into old habits and communication patterns.

Another aspect of particular interest to me was crisis negotiation training. In her last posting Sabine Walsh mused about the highs and lows of mediation training. In Hong Kong, it’s not unusual for participants in undertaking the required 40 hour mediation course to complain about the intensity of so many hours over 5 days. Well, take a look at the intensity of a crisis negotiator’s course…

Wong: We run a two-week course comprising 150 contact hours; the schedule is deliberately gruelling − from 9 am until 2 am daily. Theory is taught from 9 am until 5 pm, skills practice follows until midnight, and then debriefing until 2 am. People think about police tactical training as being very physical, and it can be. However the PNC training is serious mental training. It aims to prepare negotiators for the emotional and mental stress of long hours of crisis negotiating into which they may be suddenly thrown.It also generates excellent teamwork and esprit de corps among negotiators.

This makes one week of 40 hours look like a picnic. The psychology behind crisis negotiator training is to aim to create as much reality for the trainees as is possible within the artificial framework of training. Yes, the police trainers use role plays but they are conducted in conditions of fatigue and pressure — fairly much like real life. Gilbert even mentioned that they will conduct an unscheduled roleplay at 4 am at least once throughout the training, pulling the police trainees out of their well-earned slumber and demanding that they perform. If they don’t, they are out of the training and cannot join the Negotiation Cadre. Pretty tough entry levels for pretty tough negotiations.

Now, I am not about to suggest that mediation training institutes should conduct 80 hour training weeks or that participants conduct a mediation in their pyjamas and without a fact sheet. However, chatting with Gilbert did get me thinking about the relative ease with which people can become accredited mediators, at least in the common law world. Recent negotiation training I have been involved with, has introduced a new level of experiential learning for participants, requiring them to go out and conduct real estate negotiations for identified properties. While these scenarios are less predictable as they are less controlled, they are certainly more real for the participants and lead to powerful debriefs. The learnings that can be drawn from such experiences are potentially deeper and and more personal than those emanating from a standardised role play with participants playing other people.

When asked about the qualities of a top crisis negotiator, Dr Gibert Wong responded,

Wong: Our best negotiators are humble people who like to communicate with others from all walks of life.

Humility. Ah, now that is something for another blog posting.

The entire interview will be available online in Tan Pan: The Chinese-English Journal on Negotiation from July 2014 at the Wolters Kluwer CCH Hong Kong website.