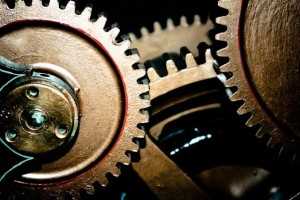 [A talk given at the recent “100 cases” event in Glasgow to celebrate two years of small claims mediation provided by Strathclyde Mediation Clinic. Judges in Scotland are known as “sheriffs”.]

I’ve been rather enjoying my belated return to the small claims court. Like a kind of slow theatre, each Friday afternoon unfolds with impeccable ritual: nervous parties rub shoulders in the corridor with the criminal accused; the clerk unlocks the court; we file in and sit deferentially behind a glass screen; beyond the screen gowned solicitors joke at a table; the security guard keeps a stern eye on us. After a few words of introduction the clerk utters the distinctive phrase “I’m just going to get the sheriff on” and finally, with a call of “court rise”, the guard ushers in the sheriff. Like a royal entry these traditions signal the seriousness of the matter.

The ritual continues. Ordinary people are transformed into “pursuers” and “defenders”; their documents into “summons” and “defences”; they are invited forward to stand and address the sheriff. Some are bold; others clearly terrified; still others have the confidence of repeat players; but none judges the correct tone like the lawyers, who pepper their remarks with “M’Lord” and “if your Ladyship recalls”. When an order is granted in their favour, they utter the inimitable “Obliged, M’Lady” (does anyone remember Parker in Thunderbirds?)

And finally, puzzlingly, it’s not final. This is not the day to argue your case or bring your evidence. These are “procedural” hearings, designed to weed out obviously hopeless cases, to allow parties to hear each other’s case for the first time and, possibly, work out a settlement. Sheriffs take a lead here, probing gently the likelihood of success, some outlining the difficulties facing one or both parties, some raising a quizzical eyebrow at the disproportionate effort for the amount at stake, some suggesting people go outside and talk to one another. These days most will point out that mediators are available to help with this.

I like the word “help”. Mediation is an imprecise word. Anyone who’s done it knows that it calls for anything from full-on conflict management to the lightest of touches. My most minimal intervention involved taking £31 from a woman to two men in a bowling club dispute. The police had been involved and neither would go near the other. It seemed a tiny contribution, yet without it they would have had to return to court another day. Their relief was touching.

Other times our mediators work for hours: building trust, actively listening, exploring options, honing and crafting a deal and writing it down. Sometimes it’s “one step forward, one step back”. One of my favourite stories came from a dispute between two women (and former friends) over architectural drawings for a small building project. In the midst of rather heated negotiations one turned to the other and said “You’re not a proper architect; you’re just a pole dancer.” Naturally the mediators under-reacted. Eventually the case settled and the terms were fulfilled.

So what is the contribution of mediation to small claims and, by extension, to the justice system? I’ve noticed three. First, humanity. No-one wants to be in court. And no-one in the court wants to be inhumane. I’ve learned that the people working there are committed and good humoured. But this is a court of law. Serious things happen. Not for nothing are we housed in a windowless room that doubles up for criminal trials. It’s not the role of sheriff or clerk to spend ten minutes in the corridor with an anxious litigant finding out what they’re really looking for. Yet this is key to the mediator role. We learn the skills of pre-mediation: engaging clients, getting at their real interests, helping them clarify their own thinking. So before mediation begins people know that a humane figure is interested in their dispute and committed to sorting it out. It’s a fair hunch that the experience of receiving empathy helps move people from adversarial assertion to problem-solving (for more on this see Charlie Irvine and Laurel Farrington, “Mediation and Emotions: Perception and Regulation” in J Stannard and H Conway (eds) The Emotional Dynamics of Law and Legal Discourse. Oxford, Hart Publishing, 2016 forthcoming).

The second contribution is more controversial. I believe mediators give advice. Not the kind that says “You have a strong case” or “You have no chance” (although I personally wouldn’t rule that out). More commonly it is process advice. Those of us familiar with the justice system can come to overlook its Kafkaesque qualities. For example, unrepresented people rarely grasp that these are merely procedural hearings; they complain that they thought they were going to get their “day in court” only to find out they have to return with witnesses and evidence. Mediators help to oil the wheels of the justice system by providing simple information: this is what happens next; if you do this, that will happen; if you don’t do this by then, that will happen. All of this is driven by our guiding principle of self-determination. Informed parties are more likely to make informed decisions.

My students are doubtless tired of hearing about the third contribution: mediation helps deliver procedural justice. Numerous studies have shown that people care deeply about the way they are treated by authorities (see Robert J MacCoun, “Voice, Control and Belonging: the Double-Edged Sword of Procedural Fairness.” Annual Review of Law and Social Science, 2005, vol. 1, no. 1, pp. 171–201). They want the chance to tell their story (“voice”); to know that someone in authority has listened (“being heard”); and to see that they have been treated fairly and respectfully (“even-handed, dignified treatment”). Mediators have both the training and the time to deliver these goals. Using their authority to prevent one party from dominating, they ensure that both parties’ get to speak and experience “voice”. As for being heard, active listening and clarification are crucial – people are often unclear about their own case, and a skilful mediator will tease this out. And impartial, respectful treatment is a core value. It requires constant work and reinforcement, and mediators allow themselves the option of separating the parties in the interests of keeping things calm and giving people time to think. All of this contributes to our overarching goal – to ensure that ordinary people achieve just and workable results.

We recently started providing small claims mediation in another sheriff court. The “oiling the wheels” metaphor was strikingly reinforced as the sheriff coaxed a large angry joiner and a sharply dressed solicitor to mediate. Once again the lightest of touches was required: the mediators stood at the side of the room while the two men negotiated a deal. Whatever part we’re called on to play, I’m content that our mediators behave humanely; give useful process advice; and provide an experience of procedural justice. This can only enhance the authority and reputation of the courts themselves.