In the “Vitruvian Man” by Leonardo da Vinci, the great Italian artist explores the concept of symmetry and proportionality in the human body, and its implications on our understanding on the wider universe.

Centuries on, we continue to be fascinated by the concept of finding beauty in symmetry. We look for it behind perfect ratios and unbroken lines, both within and all around us.

How often as mediators do we hear parties bemoan their misfortune of having to deal with a dispute? How often do we ourselves sometimes yearn for that ‘perfect’ case where everything goes as planned?

In Japanese culture, there is a world view centered around the acceptance of transience and imperfection known as wabi-sabi. It stems from Buddhist beliefs, and is sometimes defined by its acknowledgement of three realities: nothing lasts, nothing is finished, and nothing is perfect.

For a philosophy rooted in finding authenticity and beauty in impermanence, you might be fascinated to learn that wabi-sabi has found a home in a Japanese traditional lacquerware art.

Kintsugi (“golden joinery”) is a method of repairing broken pottery with lacquer dusted or mixed with powdered precious metals such as gold, silver or platinum. Breakage and repair are treated as part of an object’s history, rather than something to be disguised. On the contrary, the fine metals accentuate the lines of damage, highlighting rather than concealing the damaged areas. 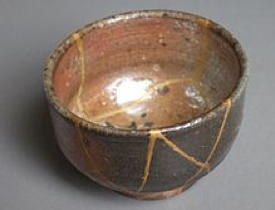 As mediators, we help parties find a way to move on from a dispute. Sometimes the parties may find a way to mend their relationship. Other times they do not. We learn very quickly in our training that it is pointless to dwell on the past; to engage in factual litanies is only worthwhile if we are finding ways to pin liabilities.

What we sometimes forget is that while the trauma of the dispute can never be erased, we need not necessarily be the poorer for it having happened. We may not have control over how the cracks were formed; we certainly can control what we can use to mend them with.

This is a huge challenge, one that we as mediators undertake all the time. Not only for the sake of the parties before us but also for ourselves. In accepting that a good mediator is not defined by his or her success rate, or that a good mediation is not defined by the presence of a settlement, we are in fact embracing a philosophy quite far removed from the pursuit of perfection and proportionality.

Intuitively, we know that parties have benefited from mediation. Yet just like the concept of wabi-sabi, how do can we help parties appreciate the value of a process, which by definition is transient?

It is akin to convincing someone that a broken bowl is more precious than an unbroken one.

Hm. Perhaps that isn’t such a long shot after all?

This piece was inspired by comments shared with the author by Choong Jia Shun. Jia Shun was a student of the National University of Singapore (NUS) Mediation Workshop 2015 and also represented NUS at the IBA-VIAC CDRC Vienna Mediation And Negotiation Competition 2016.