I have given a little thought as to whether my work as a mediator fits into one of the well-known “styles.” I do not see myself as an evaluative or directive mediator, but I do sometimes tell clients how I see their options. I would say I am a facilitative mediator, but as perhaps most mediators would say that about themselves, I wonder if the term is not way too broad. And transformative? Probably not. These categories seem too big for the specifics of mediation practice, even if they give us useful guidelines on different approaches.

Transformative mediation (Bush and Folger) works with two core ideas: recognition shifts and empowerment. Parties see themselves and the situations they have got into in a new light (recognition) and that enables them to work out ways forward (empowerment). Often this involves a better understanding of their own role in the conflict. A question I sometimes ask is: What are you doing to keep this conflict ongoing? And: how are you benefiting from this dispute? This kind of mediation seems suited to many kinds of workplace conflict.

Here is a simple example – a dispute in which two employees assigned to run a small department together were not getting along well, and were fighting about how the job should be done. The matter had escalated, with accusations of bullying. This mediation involved the two and their immediate superior, who wisely did a lot of listening. The transformative moment came when they realized they were stuck arguing who was right and who was wrong, and both apologized, and then one of them began to think out aloud about whether he was in the job best suited to his skills and temperament. As his contract was up for renewal in under a year, this was a very liberating insight.

But in this blog, I want to share a wonderful transformative and personal experience I have just been privileged to enjoy, in which I was not a mediator but a teacher, and yet I think I was a mediator too. Many mediators teach and train, and we find that mediation skills pay off in teaching.

It seemed a fairly simple task. Working for five days with a class of undergraduate students from a Chinese university and from a German university, for a week in Shanghai, teaching them “presentation and communication.” By this I understand helping them to be better aware of how they “present” themselves in various contexts, and how they can improve this and communication in general. Giving them confidence, and a toolbox that they can use and hone when the course is over.

The enthusiasm of these students was exhilarating. I invited them to try out all kinds of communication games and situations together taken from my childhood, from TV, from professional settings, from my imagination – and of their own making. The first thing I did the first morning was to inform them that cell phones would not be used at all in class (a very intimidating thought for students these days) and that we would not use desks – so would they please move the desks out. For many readers of this blog perhaps nothing special. For the students in question, who are used to university teaching as an endless stream of lifetime-wasting lectures with PowerPoint and dumb notetaking when not just dozing off (pretty much the same whether in China or Germany), this was revolutionary.

Quickly came recognition, the realization that there are more meaningful ways to communicate and interact than their usual university classroom fare offers, and the realization that the students themselves can make communication meaningful. It moved on to empowerment, as these students took over the class and managed their own so very creative presentation formats, improving the clarity of their communication with each one. I was dumbfounded at how they also brought content into this class that was relevant to their lives, and shared so much with me and each other in the process, learning so much about each other’s societies.

They wrote class diaries in which they reflected on their learning. This was the only really meaningful class that he had experienced in four semesters of a bachelor’s degree, one German student said. And many of the students (especially but not only the Chinese) shared with me how they had overcome their shyness, finding a “new me,” experienced “rebirth,” and gained confidence they had never known they had.

This is wonderful. But I see it as a sad verdict. There is so much wrong with education when it takes away young people’s inherent creativity and confidence. But that is one thing that many schools and universities seem to particularly good at. I recommend you to take a look at Ken Robinson’s TED talk on the subject, if you have not yet done so.

But was this mediation? I think so. I do not think that I would have had the wherewithal to manage a course with this same degree of student-centered learning before I became a mediator. Being a mediator is about understanding what your clients need and helping them to express it. Being a teacher should be about understanding what your students need.

The students I worked with are spending a semester as a mixed-culture class, and when I joined them they had already been in a classroom together for four weeks. They had hardly got to know each other, sitting in rows behind desks listening to lectures, and scarcely meeting outside class. They told me that their relationships had now been transformed, that they had gained interest in each other as people, in the others’ cultures, and as friends. The last evening they took me to a bar, together.

How did we get where we got? The main reason was the students’ creativity. I nudged them by being facilitative on content and directive on process – reinforcing the message that we were together to listen to each other, to interact, to share, to play, and to practice the art of communication at its best.

This was a unique and – yes – transforma 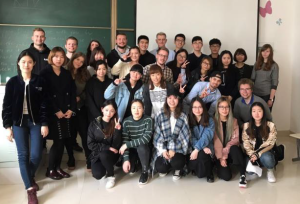 tive and empowering experience, for which I am very grateful. Thank you to all participants.