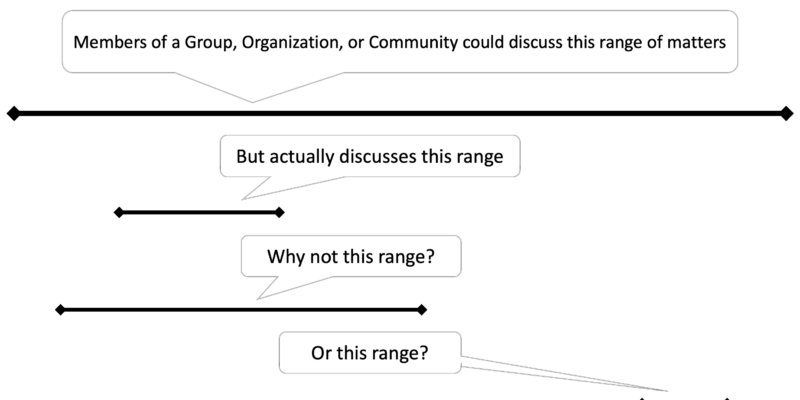 I just spent an intensive weekend on Zoom with my students, helping them navigate their early steps into mediation practice. So much has changed. I have never met most of them face to face; we sit at home on our screens; there are no coffee break conversations. Yet one thing remains the same: the words mediators use shape the worlds they join. And every year we have the pleasure of hearing Prof Mark Aakhus of Rutgers University, NJ, illuminate what mediators do with words.

Mark is a professor of communication and has contributed to that precious sliver of mediation research based on observations of real cases. What he brings to our attention is that mediators are constantly making choices, knowingly or not, about what to reveal and what to hide. This simple insight is illustrated by the image above: we cannot discuss everything all the time, so we are selective. That selection brings certain things to light and leaves others obscure. Mark calls this communication design practice. Its central question is ‘how to make communication possible that was once difficult, impossible or unimagined.'(2)

So how do mediators go about this? Anyone who has ever mediated knows how little we can plan. The complex and sometimes rapid interchange impels us to respond to what’s in front of us. Mediation is supremely in the moment. To illustrate how it works Mark sets us a little game. He reads out two fairly testy exchanges between parents in recordings of family mediations. Then he pauses the action to ask: ‘What would you say next?’

Students’ responses did a number of things. Some were pure process, requesting a pause or time-out, or proposing a protocol for further conversation (‘if we can let one another speak and then respond after that would be good’). In hindsight I realise that saying anything at all creates a pause – our words do things as well as describe them. Another angle on process was respect, a plea for a particular conversational tone, though I wonder if this might be interpreted as an accusation of disrespect. I also liked the more intuitive ‘OK, OK,’ pausing the exchange while minimising the potential for accusation.

Some responses privileged emotion, offering expressions like ‘strong feelings’ and ‘frustration.’ Others got into content. Students named matters like communication, pickup arrangements and child support. Or they requested more detail, implicitly framing the exchange as a problem-solving conversation. And still others took the step of noticing commonalities, even by the simple use of the word ‘both’: ‘your daughter’s happiness; you both share that same concern.’

One important take-away from this exercise is the sheer range of responses. There is no single right answer. This sets mediation apart from other forms of social interaction such as courts, animated by truth-seeking. That doesn’t mean our responses have no consequences. Each option conveys explicit and implicit messages about what we regard as important and what we seek to conceal or ignore.

Mark named these options ‘message design logics,’ drawing on the work of Barbara O’Keefe. Behind what we say lies our thinking about the communication and our motivation for intervening. In his research he and colleague Scott Jacobs propose three possible logics by which mediators craft their interventions: critical discussion, therapeutic and bargaining. Critical discussion focuses on formal logic, meaning mediators would ‘draw attention to forms of fallacious reasoning and prevent disputants from shifting the discussion toward other types of discussion, such as quarreling.'(3) Therapeutic design logic focuses on communication and relationship, meaning disagreements ‘are really only symptoms or fronts that would dissolve if deeper relational conflicts were articulated and addressed.'(4) And a bargaining design logic focuses less on principle than pragmatics: ‘The conflict is over not what the parties believe but, rather, what they want.'(5)

The fascinating finding for mediators is this: their sample rarely employed critical discussion or therapeutic logics. The predominant approach was bargaining. Conflict was framed as a matter of ‘competing wants and interests’; resolution consisted in ‘maximising gain and minimising costs’; and the criterion for evaluating success was ‘mutual acceptability.'(6) This will come as little surprise to many. We quickly learn that there’s little mileage in attempting to persuade or dissuade.

Mediators do a great deal of their learning in high-stress conditions. We are literally making it up as we go along, in response to the action unfolding before us. That action can be hair-raising. I’ve spoken before about the need to practice, practice, practice. Mark’s research reminds us that this learning process is shaped by our consumers. We make a succession of choices about what to emphasise, what to pursue, what to ignore, what to leave for later: our design logics. And we learn, apparently, that many (undoubtedly not all) of our clients are more concerned with, or practiced in, getting a deal (bargaining) than with their relationship (therapeutic) or matters of principle (critical discussion). This may be true of mediators too, especially when push comes to shove in the micro-moments of high-stress conditions.

This doesn’t mean that mediators should abandon their concern with principle, or relationship, or justice for that matter. It does, however, call for continuous attention to what’s going on in the flow of our work. Some people will gladly accept the offering of a therapeutic or critical discussion logic. Others won’t. I suggest that just as we shape the world by our choice of words, so the world of other people’s conflict shapes us. We learn bargaining, even if that’s not what got us into mediating in the first place. This is neither terrible nor marvellous – just one more twist in the development of a word that means different things to different people: mediation.

Particular thanks to Mark Aakhus for his input into the class and helpful comments on this blog.