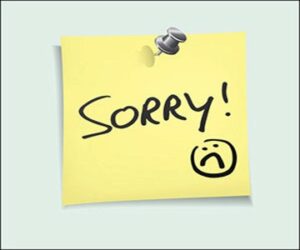 The world of mediation today is far from the embryonic world I joined in the late 1980s. It has been wonderful to be part of the journey.

From time to time there are major ‘disruptions’ – the exploration of mandatory mediation in some jurisdictions; the debates over definitions and enforceability and most recently the impact of Covid. However nothing has significantly or permanently derailed the ongoing exploration and development of the field .

I was reflecting on this as I was conducting my own regular review of what is happening in my practice and what is the learning for me. I did so whilst in the midst of a long-running mediation between a government authority and affected consumers where an inability by one party to deliver an effective apology created an escalation of the conflict that could probably have been halted very early in the proceedings.

It prompted an ‘aha’ moment for me –  where it seemed very clear that despite the significant changes I have observed in how parties see mediation and their understanding and willingness to engage in it, some things have not really changed.

And the apology challenge I was observing in the current mediation was the most significant example. Because my experience is that despite all the research and published articles, there does not seem to be an increased recognition by parties and their advocates about what makes an effective apology.

I have written about this before but it is time to keep this conversation going and so I have decided to expand on my comments.

Is this just a mediation problem?

While I was reflecting on what I would write, the Australian Federal Election was playing out in the background – an unpleasant distraction – filled as it was with accusations and revelations of truly reprehensible behaviour. It included revelations about the decision to cancel a major submarine contract with the French – a decision shrouded in our misleading behaviour which greatly offended a significant global ally. Asked whether he thought the former Australian Prime Minister had lied to him, President Macron responded ‘I don’t think, I know!’ – a phrase since printed on many Australian Tee shirts. Our former Prime Minister responded with obfuscation and what seemed like more untruths, closing with the universally unhelpful ‘pretend’ apology – I’m sorry if the (French) President didn’t understand why it was necessary.

At the same time, the airline industry was attempting to resume normal service and Qantas, our major player, experienced a series of damaging events, with passengers stranded, baggage lost and customers complaining loudly. The necessary grovelling apology from Qantas was nowhere to be seen. The CEO made a statement blaming the passengers for being out of practice with flying protocols. The outcry has not died down.

There are many more examples and now I have begun to wonder whether it may be a particularly disappointing Australian characteristic – that we have an exaggerated reluctance to acknowledge our mistakes and find ourselves unable to accept responsibility via an appropriate apology. Perhaps it is this trait in our national and international behaviour that carries over into the mediation room.

As I reflected, the examples continued to present themselves – this time the outrageous treatment of the Australian actor Rebel Wilson by a national newspaper.

The story deserves a place in the ‘most bungled apology ever’ awards and attracted international opprobrium, The paper’s gossip writer, Hornery, had approached Wilson to confirm she had a new partner who, unlike previous partners, was female and giving Wilson a 2-day deadline to respond.

Wilson took control of the narrative by outing herself. Hornery responded by criticising Wilson. Three attempts later, with the world watching appalled, no one associated with the paper had managed to figure out what a  genuine apology should sound like. Finally, the fourth apology, delivered by the editor, got close and it looks like the incident may be settling into the background.

Maybe things won’t improve in the mediation room until we see some significant leadership from our new government and from public figures – supporting a cultural change and demonstrating a willingness to apologise early and appropriately for wrongdoing.

In the meantime I am taking every opportunity I can to include in my training programs for business leaders, exercises using this terrific text. The piece I find most helpful is the thoughtful material in Chapter 3 which takes us through what often prompts the need for an apology and it goes like this: 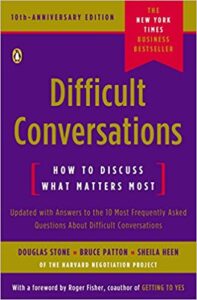 But sadly it is not!

What is really helpful is the tools that this text gives us to move from blaming to understanding.

Tools help us to take 6 steps:

Watch this space – I choose to be optimistic.